IS PLEASED TO ANNOUNCE THE RELEASE OF

With the Avenger Package, MAAM-SIM continues its tradition of presenting flight simulator models that are meticulously researched and duplicated to the highest standard.  The physical model, flight dynamics, sound, and functionality are as true to the original aircraft as it is possible to get within the framework of Flight Simulator.  Our model has been vetted by real pilots on our beta team, the "BTBT", including a couple real-world Avenger pilots, retired Naval Aviators, corporate pilots, airline pilots, and private pilots of vast experience.  The end result is a flightsim experience that is the next best thing to strapping into a real Avenger.

"Aside from having what we feel are some of the best developers in the business on our unpaid but dedicated staff, we have another big advantage over other third party add-on teams and companies - we don't just have access to the real plane - we own it!"

The TBM in this FS aircraft add-on package has been designed to duplicate, in appearance, sound, and performance, the TBM-3 Avenger, tail number N109K, owned and operated by the Mid Atlantic Air Museum.  It was designed by Grumman, but built by the Eastern Aircraft Division of General Motors.  (If the plane was built by Grumman it was designated TBF.  If it was assembled by Eastern, it was a TBM.  Other than the change in nomenclature, the TBF and TBM of the same model were identical. )  Our version is equipped with the necessary modern radios and the associated instruments that allow her to be flown in today's ATC environment.  It features MAAM-SIM's signature photo-real textures, inside and out...

In addition to the MAAM TBM, we have included four other, different Avenger models in this package with a total of sixteen liveries.  These models include:

The TBF-1/TBM-1, the first production model of the Avenger, differs from the later TBM-3 in engine, control panel, and some structural details in the cowl flaps, oil cooler flaps, arresting hook, and ventral gun position structure.

Other TBM-1's in the package include:

Other TBM-1C's in the package include:

The Tarpon Mk I, later called the Avenger I, was the British Royal Navy version of the TBF-1.  It had distinctive domed observation ports in the rear compartment (instead of the flat, oval American windows) to facilitate U-boat spotting...

The Tarpon II/Avenger II was essentially the TBF-1C with the RN's domed windows...

Of course, more free repaints will be streaming in to our Free Stuff Pages and a fully-layered paint kit will be released soon after the plane. 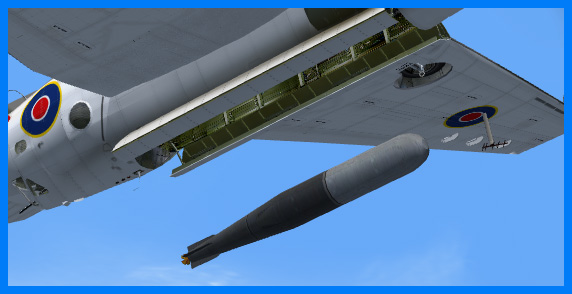 As you see in the picture above, the plane can drop a torpedo, if you remember to load it before takeoff!  That is just a hint of the special effects, animations, and unique features.

A single screen-shot can not do justice to the gunfire effects, which include muzzle flashes, tracers that ricochet, brass cartridges ejecting, gun smoke trails and the sounds of actual .50 and .30 machine guns recorded on the firing range.

The Electrical Distribution Panel is fully modeled and working, in both 2D and virtual cockpit, including the armament system and the most complete and accurate WWII aircraft lighting system ever released in any FS aircraft.   This features the first-ever properly-working recognition lights, used to keep friendly gunners from shooting down their own planes returning in the dark; formation and section lights, and navigation lights that can be dimmed. 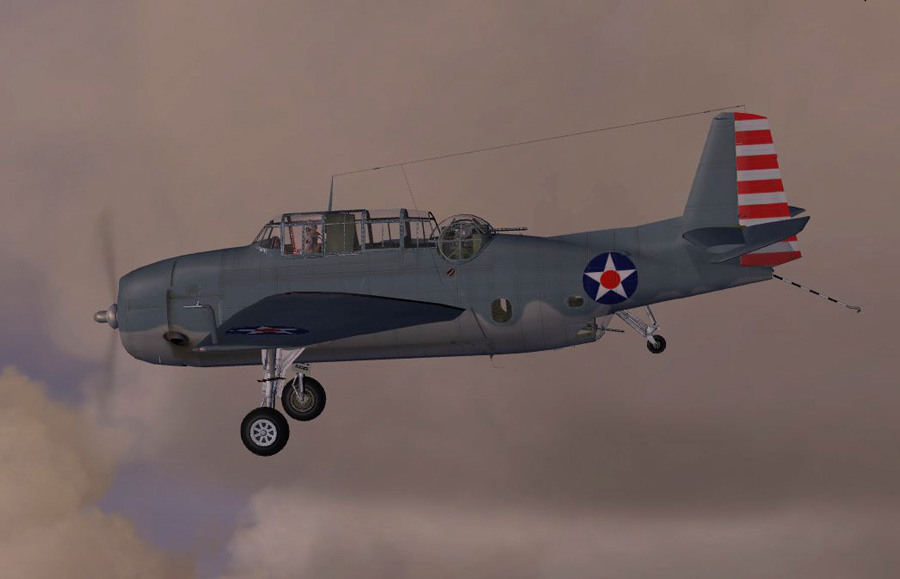 I'm going to take advantage of the unplanned fact that the last minute rush to get the package finished in time for its promised World War II Weekend release last Friday prevented me from issuing this press release on time.  I'm going to quote a forum post by one of our early customers...

"All I can say is WOW, this is one of the most detailed and atmospheric add-ons I've ever purchased.  I have never been a big fan of WW2 warbirds in FS, they never really seem to capture the aircraft but this one is different.  Just the start-up sequence is fun to watch by itself.  Right after I got the engine running I thought I noticed something strange about the textures on the pilot... no bug here... the sleeves of his flight suit were flapping in the wind with the canopy open!  The designers put more thought and detail into the pilot than some put into their whole aircraft!

The VC is amazing, and not even a hiccup or hint of slowing down my computer which is 3 years old now.  Torpedo drops... guns fire... the pilot can wear two types of helmet, and you can take his Ray-bans off and on.

The plane feels right to me... big.. heavy... stable.  There are two manuals, one is a HTML sim operating manual and the other is a PDF file of the original pilot's operating manual.  The POH is especially interesting and most likely would cost you more to buy than the cost of this entire package.

The whole aircraft is so full of little details I am still a little overwhelmed.  The wing folding "horn" operates exactly as the 1940's POH states, you can use the hand pump to pressurize the hydraulic system on the ground without the engine running.  In the cockpit you can pull out the navigation table and on it there are hand written pilot notes on the operation of the aircraft all of which can be rearranged on the desk."

Thanks for the great endorsement, 'monkie'.  You saved me some writing!   That hydraulic system is another first.

It's not only useful on the ground, you may use it to pump down the gear, open cowl flaps, operate the bomb doors, and so on, in the event of an engine failure - a real possibility, if you do things wrong.  The Engine Failure option can be toggled on or off, but if you want to fly by the book, as you should in this realistic model, overheating the engine will cause the Turkey to express it's distress!  You'll see - and hear.

Did we mention you get the TBM's home "bird farm", too?

This "small carrier" was the home of the plane that MAAM's TBM-3 represents.  Our Turkey was restored and donated to the museum by Jack Kosko, who was the radioman aboard the original, which was pushed overboard after a barrier crash on deck during the Okinawa campaign.

It's amazing that the largest carrier-aircraft of the war often served aboard some of the smallest carriers, ships designated CVL (small) and CVE (escort).  Our planes and carrier give you the opportunity to experience some of the challenges faced by crews of the Avengers!  We think your respect for those courageous Naval Aviators will grow as you try your hand at launching and trapping aboard its relatively tiny deck.

Our rendition of the USS Langley and the 16 Avengers in this package all come equipped with the Carrier Operation Package - Version 2 for FS2004, RCBco-20.zip, by Rob Barendregt and Doug Dawson.  This nifty program requires the must-have utility FSUIPC, by Peter Dowson, so that is also included in our package installation.   (There are three installation options in case you already own these programs).

After installation of the full package, you will be able to trap aboard and catapult from the deck of the Langley with no editing or set-up at all.  If you already use the COP, there are two simple copy and paste entries for the cat and arrest zones in your gauges folder.  All the rest has been done for you.

If you want or need to know even more before you part with your hard-earned $35, you can see and read it all by downloading a free copy of the html Avenger Software User's Manual.  Besides, if you buy the plane and skip the manual, you are going to miss a lot!  But enough talk.  Go get this bird and enjoy your hot Turkey.  You'll be doing yourself and a worthy cause a good turn.

100% OF THE PROCEEDS FROM SALES OF MAAM-SIM PRODUCTS DIRECTLY SUPPORT THE RESTORATION PROGRAMS OF THE MID-ATLANTIC AIR MUSEUM, READING, PENNSYLVANIA. 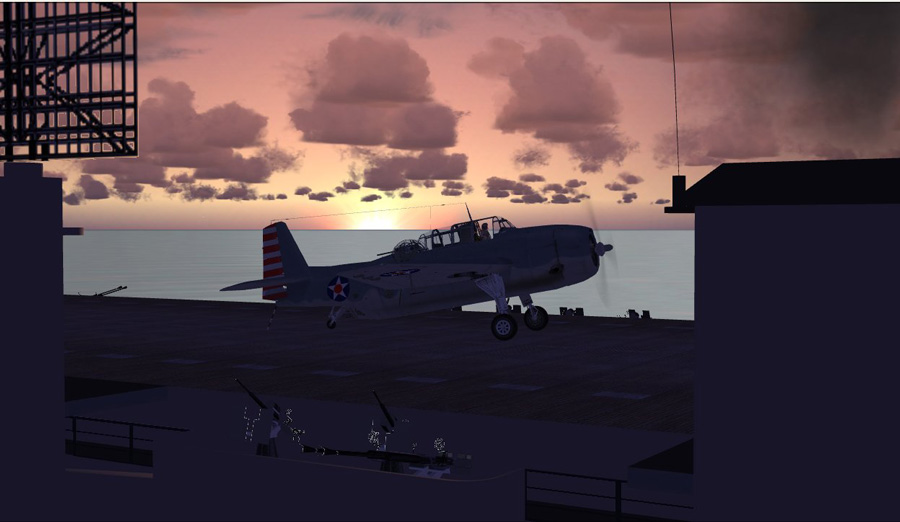